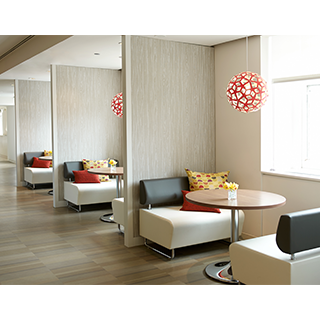 Evoke is a breakthrough alternative to drywall that is changing everything – from the minds of architects to the hearts of designers. Now you have the freedom to express yourself in ways once thought unimaginable with a wall system. Featuring the passive aesthetics of drywall with virtually seamless reveal lines, Evoke is as flexible as a traditional movable wall, yet is screen-printable wrappable, and even paintable in the field – anything but dry.

With a construction process as simple as permanent wall, Evoke installs faster and easier than drywall (and other traditional movable wall systems) and can also be quickly reconfigured with far less waste at a minimal cost – giving contractors, architects and designers alike an unprecedented level of control.

Working in concert with existing drywall as well as KI’s Lightline and Genius architectural walls, Evoke’s performance is inimitable. And with a Sound Transmission Class (STC) performance rating up to 50, its acoustics are unbeatable, in turn minimizing distractions and maximizing productivity.