Antenna’s Toboggan is a hybrid chair-desk, allowing you to use it as a conventional chair or as an impromptu workstation.

Via FastCo.Design: In the 21st century workplace, we covet expensive ergonomic workstations. But one can’t easily collaborate with others from the isolation of our cubicles, and most office furniture doesn’t support the casual exchanges that can lead to big ideas. Enter the Toboggan: a sled-base table and chair that encourages both work and conversation, without looking like a student desk. 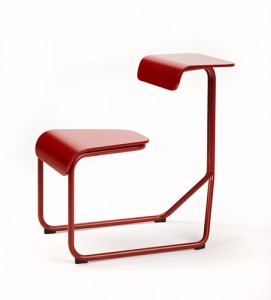 Designed by Masamichi Udagawa and Sigi Moeslinger, of New York–based Antenna, the Toboggan is a facet of the couple’s line of office furniture for Knoll that balances the individual concentration and collaborative teamwork. Says Moeslinger, “The office plan has shifted so that more and more space is dedicated not just to straightforward personal workstations but to providing shared space.” But, says Udagawa, “There’s nothing specifically developed for such a space.” Toboggan fills that void. One can use it either as a lightweight, movable chair; turn around, and the backrest becomes a surface for a tablet, small laptop, or sketchbook.

The minimalist form—borrowing from the Modernist vocabulary of bent steel tubes and molded plywood—communicates the chair’s hybrid nature without being prescriptive. “There isn’t such a directionality as when you sit together at a conference table, where the arrangement of the chairs is quite predictable,” Moeslinger says. “There’s no front or back.”

Creating such a lithe profile wasn’t easy in the context of the contract furniture market, which adheres to stringent standards for safety and weight loads. That meant enlarging the diameter of the steel tube and adjusting the chair’s proportions accordingly. “The nice thing about these structural requirements is that they lead you down a path to a certain change that you wouldn’t have thought of before,” Moeslinger says, “then it turns out even better than it was at first.