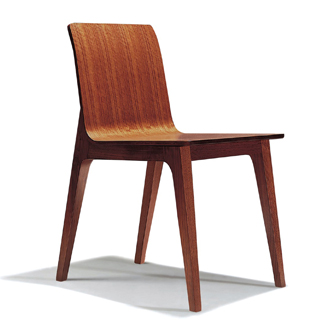 The Edit Side Chair by Bernhardt Design

Swiss and American by nationality, Philippe Cramer was born in New York in 1970 and raised in Geneva, Switzerland, where he now resides. After schooling in Switzerland, Cramer studied in London and received his Certificate in History of Decorative Arts of the 19th and 20th Century. In 1996, he graduated from the Parsons School of Design in New York where he studied furniture design and photography.

After working an internship in an auction house, Cramer served as an assistant to fashion photographer Paolo Roversi in Paris and later as a graphic designer at Atlantic Records in New York. His career as a three-dimensional designer began at the Museum of Modern Art product development department working with Seth Adleman on products for the MoMA Design Store. Returning to Switzerland, Cramer worked for over two years in production and sales for a furniture company while entering his own designs in design contests.

With a broad base of creative experience, he formed Cramer + Cramer with Barbara Cramer in 2001, a company specializing in the design and production of luxury goods under the Philippe Cramer brand. As Creative Director, he designs diverse collections ranging from furniture and lighting to glassware and jewelry.

Since founding Cramer + Cramer, numerous magazines have profiled his work including Wallpaper, Vogue and Elle Décoration. His design work has been the focus of exhibits at the galleries “Le Garage” and “Edward Mitterrand” in Geneva, the gallery “ArtCurial” in Paris, and the Swiss Cultural Center in Milan. In 2003, Cramer + Cramer unveiled their first showroom in Geneva, began distribution in Switzerland, France and Germany, and exhibited at the “Maison et Objet” trade fair in Paris.