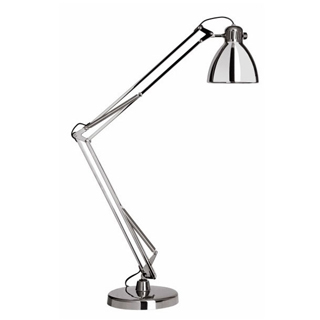 The L-1 Task Light by Luxo is widely regarded as the forerunner of all self-balancing desk lamps. It is now available in polished chrome.

The unique design, ingenious lighting properties and a flexible spring-balanced arm have earned L-1 a place among the world’s all time classics. The lamp also had some late fame when being featured as the leading character in “Luxo Jr.”, the first computer-animated short film by Pixar.

In 1936 Jac Jacobsen received two crane-like spring balanced “monster” luminaires included in a shipment of sewing machines from England. Although the technical invention comprising the luminaire arm was ingenious, the luminaire construction as a whole was primitive and had to be improved a great deal before being approved and presented to the market. He succeeded, and manufacturing started in Oslo in the autumn of 1937. He derived the name LUXO from Latin – “I give light”.

The original version of the Luxo architect luminaire, L-1, is still in production, and more than 25 million units have been sold worldwide. Jac Jacobsen lived to be 95 years old and was active in the company until his last days.